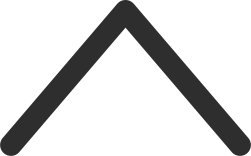 The Teaching Hemingway Series presents multiauthor collections of essays on various approaches to teaching the emergent themes in Hemingway's major works to a variety of students in secondary public and private schools, and at the undergraduate and graduate level. Among other topics, forthcoming volumes will explore the role of gender, modernism, the natural world, war, and race in Hemingway's most enduring works.

Take a look at this TEDx talk and podcast by series editor Dr. Mark Ott and the Hemingway Society's newsletter with an interview and Q&A with editors Laura Godfrey and Gary Edward Holcomb. The Teaching Hemingway series is published by Kent State University Press and the books can be found on Amazon. Also check out our partner series Reading Hemingway, edited by Mark Cirino, also published by Kent State University Press. 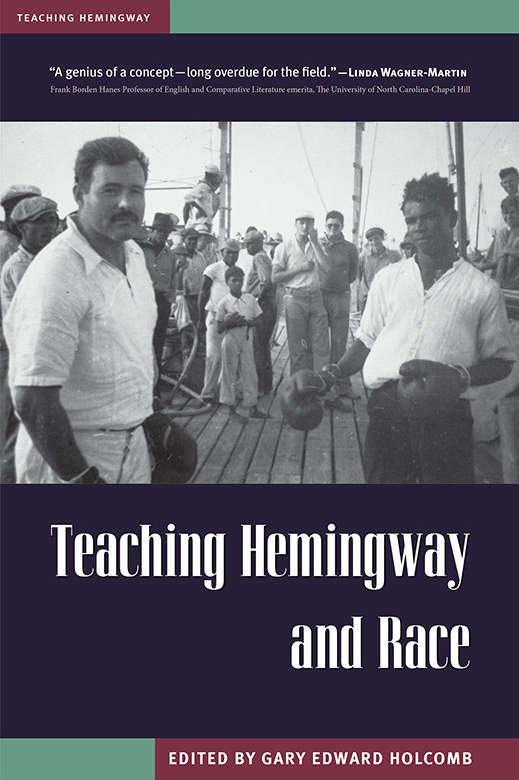 Teaching Hemingway and Race provides a practicable means for teaching the subject of race in Hemingway’s writing and related texts—from how to approach ethnic, nonwhite international, and tribal characters to how to teach difficult questions of racial representation. Rather than suggesting that Hemingway’s portrayals of cultural otherness are incidental to teaching and reading the texts, the volume brings them to the fore.

This latest volume in the Teaching Hemingway series includes ten essays by leading scholars that place racial markers in their historical context, while also illuminating those connections for scholars, classroom teachers, and students. Readers will find it refreshing and enlightening to encounter essays that juxtapose Hemingway’s work alongside Alain Locke’s The New Negro and explore Hemingway’s influence on Jean Toomer, Langston Hughes, Ralph Ellison, Ernest Gaines, and other black writers. 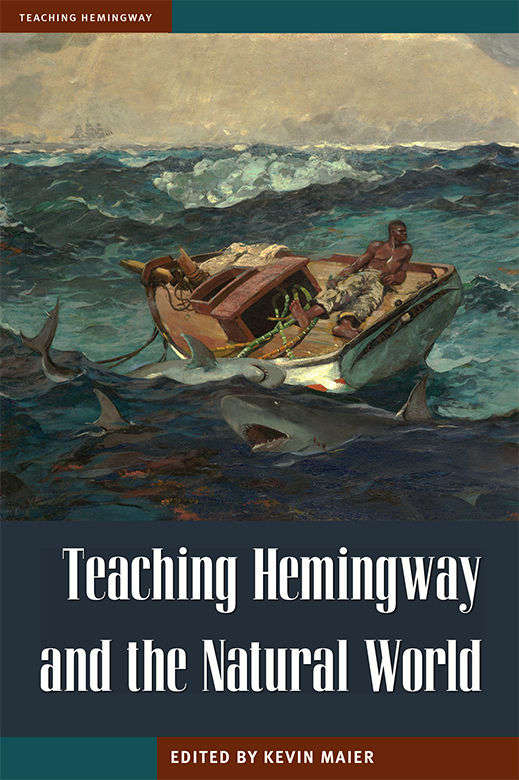 Teaching Hemingway and The Natural World

Ernest Hemingway is a writer we often associate with particular places and animals; Michigan’s Upper Peninsula, Spain’s countryside, East Africa’s game reserves, Cuba’s blue water, and Idaho’s sagebrush all come to mind. We can easily visualize the iconic images of Hemingway with fly rod bent by hefty trout, with bulls charging matadors, or of the famous author proudly posing with trophy lions, marlin, and a menagerie of Western American game animals.

Hemingway read widely in natural history and science, as well as the literature of field sports. This lifelong interest in the natural world and its inhabitants manifests itself in Hemingway’s writing in myriad ways. From the trout Nick Adams carefully releases to Santiago’s marlin and Robert Jordan’s “heart beating against the pine needle floor of the forest” to Colonel Cantwell’s beloved Italian duck marshes, and from African savannahs to the Gulf Stream, animals and environments are central to Hemingway’s work and life. This volume in the Teaching Hemingway series explores how his writing sheds light on broader questions of the human relationship to the nonhuman world. 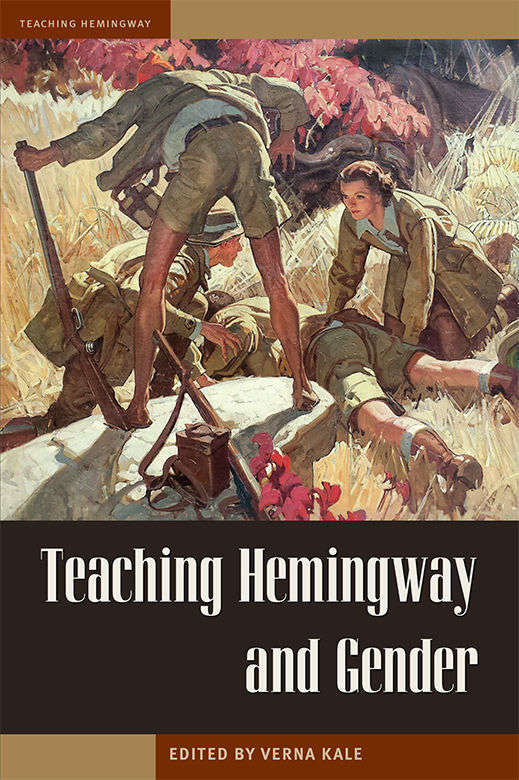 Ernest Hemingway’s place in American letters seems guaranteed: a winner of Nobel and Pulitzer prizes, Hemingway has long been a fixture in high school and college curricula. Just as influential as his famed economy of style and unflappable heroes, however, is his public persona. Hemingway helped create an image of a masculine ideal: sportsman, brawler, hard drinker, serial monogamist, and world traveler. Yet his iconicity has also worked against him. Because Hemingway is often dismissed by students and scholars alike for his perceived misogyny, instructors might find themselves wondering how to handle the impossibly over-determined author or even if they should include him on their syllabi at all.

Teaching Hemingway and Gender introduces both students and scholars to Hemingway’s surprisingly multivalent treatment of gender and sexuality. Individual essays deal with Hemingway’s short stories, novels, and the posthumously published novel The Garden of Eden, but the ideas are widely applicable in discussions of modernism, authorship, the literary market place, popular culture, gender theory, queer theory, and men’s studies.

The essays in Teaching Hemingway and Gender elucidate Hemingway’s emergent themes as well as the ways in which we might challenge students—and ourselves—to engage them. 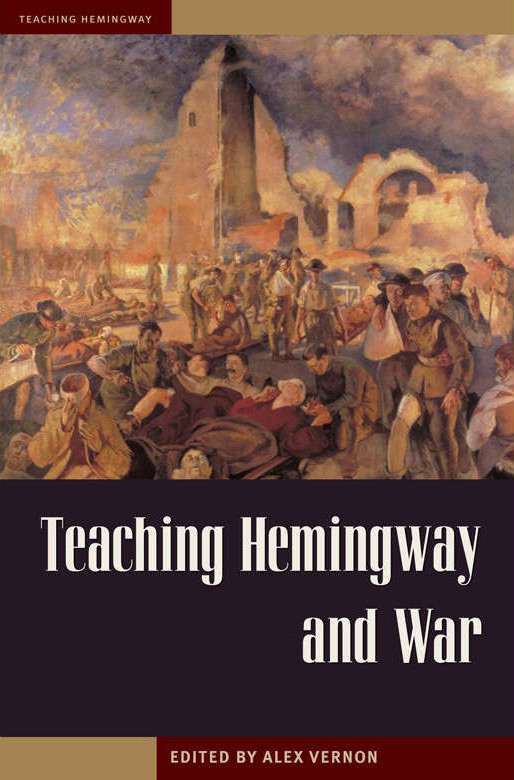 In 1925, Ernest Hemingway wrote to F. Scott Fitzgerald that “the reason you are so sore you missed the war is because the war is the best subject of all. It groups the maximum of material and speeds up the action and brings out all sorts of stuff that normally you have to wait a lifetime to get.” Though a world war veteran for seven years, at the time he wrote Fitzgerald, Hemingway had barely scratched the surface of his war experiences in his writing, yet it would be a subject he could never resist. As an eyewitness to the emergence of modern warfare, through the Second World War, and as a writer devoted to recreating experience on the page, Ernest Hemingway has gifted us with an oeuvre of wartime representation ideal for the classroom.

Teaching Hemingway and War offers fifteen original essays on Hemingway’s relationship to war with a variety of instructional settings in mind, and the contributors bring to the volume a range of experience, backgrounds, and approaches. 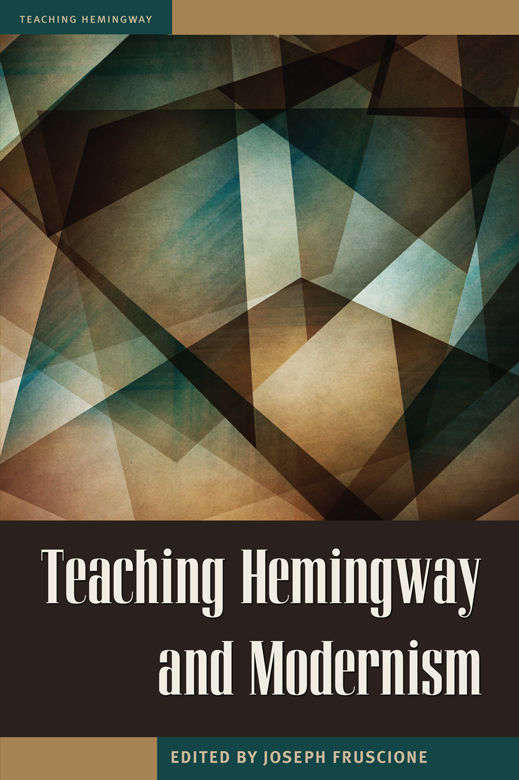 Teaching Hemingway and Modernism presents concrete, intertextual models for using Hemingway’s work effectively in various classroom settings, so students can understand the pertinent works, definitions, and types of avant-gardism that inflected his art. The essays and related appendices balance text, context, and classroom practice while considering a broad and student-based audience. How can we teach his stylistic minimalism both on its own and in conjunction with the more expansive styles of Joyce, Faulkner, Woolf, and other modernists?

Teaching Hemingway and Modernism is an indispensable tool for anyone teaching Hemingway, and it offers exciting and innovative approaches to understanding one of the most iconic authors of the modernist era. 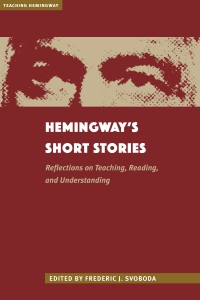 Sometimes characterized as the most significant author since Shakespeare, Ernest Hemingway was an acknowledged master of the short story, with his groundbreaking style and its apparent simplicity and honesty changing the nature of English prose fiction. While in the early 1920s some mainstream editors seemed baffled by their subtlety, today his stories are mainstays in the classroom, taught at all levels from secondary school through university graduate courses.

In this collection, 13 master teachers from all levels discuss these and other aspects of his work, demonstrating how they motivate students to appreciate what Hemingway is doing. Each has a unique point of departure, each a rich and unique background to bring to both students and interested readers. The volume includes classroom exercises and resources, teaching points, and commonly encountered issues. 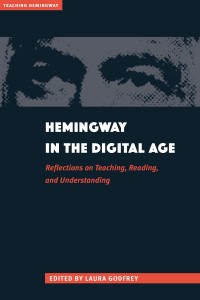 Hemingway in the Digital Age

How can we convince readers, and especially students, to slow down to the crawl that is often necessary to see the real power in the compressed language Hemingway uses to tell a story? Are there qualities of digital age life that make students, somehow, more connected to Hemingway’s life and his writing?

Laura Godfrey has assembled a group of scholars who speak eloquently to these questions. Hemingway’s characters are seen trying to live life “all the way up,” the way Hemingway’s bullfighters did—so which characters do we see as most engaged with the world? And so, in this 21st-century “digital age” and its increasing vocabulary about the importance of being mindful, present, intentional, and engaged, Hemingway’s writing has become relevant for readers and students of all ages in exciting new ways. 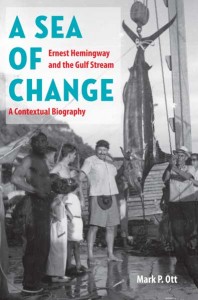 A Sea of Change

A Sea of Change is the first study to examine Hemingway’s complex relationship with the Gulf Stream and how it transformed his fiction. Early in his career, when To Have and Have Not was published, Ernest Hemingway’s portrayal of themes, setting, and character was often compared to Cezanne’s art—abstract. By contrast, in 1952, with the publication of The Old Man and the Sea, his style was described as comparable to Winslow Homer’s—realistic.

At the center of this evolution is the contention that Hemingway’s preoccupation with and scientific study of life in the Gulf Stream moved his theory and practice of writing away from the Paris art circle of the 1920s to the new realism of the 1950s. Drawing primarily on Ernest Hemingway’s handwritten and unpublished fishing logs and from published and unpublished correspondence and newspaper articles, Mark P. Ott structures this literary biography chronologically to tell the story of Hemingway’s life as it becomes immersed in the Gulf Stream. 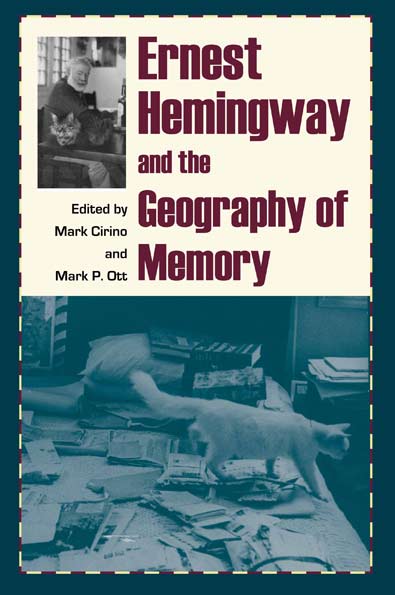 Ernest Hemingway and the Geography of Memory

Ernest Hemingway’s work reverberates with a blend of memory, geography, and lessons of life revealed through the trauma of experience. Michigan, Italy, Spain, Paris, Africa, and the Gulf Stream are some of the most distinctive settings in Hemingway’s short fiction, novels, articles, and correspondence. In his fiction, Hemingway revisited these sites, reimagining and transforming them.

Travel was the engine of his creative life, as the recurrent contrast between spaces provided him with evidence of his emerging identity as a writer. The essays are divided into four sections— Memory and Composition, Memory and Allusion, Memory and Place, and Memory and Truth—and examine The Garden of Eden, In Our Time, The Old Man and the Sea, Green Hills of Africa, Under Kilimanjaro, The Sun Also Rises, A Moveable Feast, A Farewell to Arms, and Death in the Afternoon, as well as several of Hemingway’s short stories. The contributors to Ernest Hemingway and the Geography of Memory employ an intriguing range of approaches to Hemingway’s work, using the concept of memory as an interpretive tool to enhance understanding of Hemingway’s creative process. 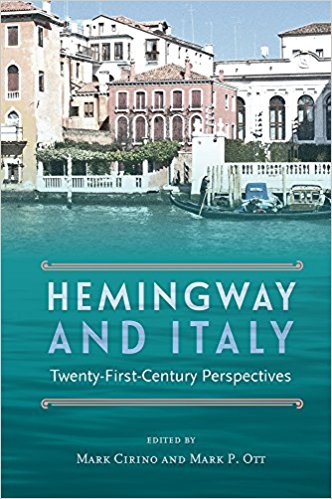 From his World War I service in Italy through his transformational return visits during the decades that followed, Ernest Hemingway’s Italian experiences were fundamental to his artistic development. Hemingway and Italy offers essays from top scholars, exciting new voices, and people who knew Hemingway during his Italian days, examining how his adopted homeland shaped his writing and his legacy.

The collection addresses Hemingway’s many Italys—the terrain and people he encountered during his life and the country he transposed into his fiction. Contributors analyze Hemingway’s Italian works, including A Farewell to Arms, Across the River and into the Trees, lesser-known short stories, fables, and even a previously unpublished Hemingway sketch, “Torcello Piece.” The essays provide fresh insights on Hemingway’s Italian life, career, and imagination.